Lessons learnt is a section emerging from the experience of the GRACE project’s Implementing Organisations. This content is based on knowledge gained during the implementation of their Grounding Actions, providing orientations for future actions. Initially designed for the project’s six partners, they can be useful for anyone developing an RRI project! 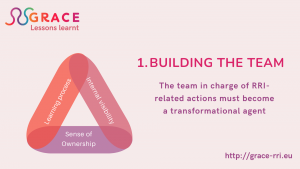 The team in charge of RRI-related actions should be aware of their potentials and limits in activating institutional change processes.

To be effective, the team should become a transformational agent, i.e., a group of people able to mobilise other individuals and stakeholders, within and outside their organisations, and to channel their energy and interest towards RRI-related objectives.

Acquiring RRI-relevant knowledge and skills is a necessary first step to take for gradually allowing a team to serve as a transformational agent within the organisation. This entails activating an internal learning process as well as accessing expertise from outside the team, internally or externally to the implementing organisation. Different strategies can be developed, such as establishing an advisory board, accessing training opportunities and resources, exploiting in-house expertise, or cooperating with other organisations and networks.

To serve as a transformational agent, the RRI team should also be internally visible and have some sort of recognition, which can be achieved though the involvement of leaders, enlarging the extended team as far as possible or an increased use of institutional communication channels.

Cohesion and a sense of ownership are two key elements to make a team able to mobilise others on RRI.  Internal conflicts and diverging views may lead the team to be less impactful and should be addressed straightforwardly and timely. Cohesion can be achieved through regular reflexive meetings with the whole team, allowing them to build up their identity (a common view, a common way to work together, etc.).